ANA and Lufthansa Cargo received antitrust immunity on September 3 from the Japanese Ministry of Land Infrastructure and Transport for the strategic air cargo joint venture on routes between Japan and Europe and vice versa.

Based on this official approval from the authority, we will start the joint sales on all routes ex Japan to Europe operated by two carriers from December 1, 2014, Monday. (Sales and bookings will be available from this day)

From now on, we will benefit our customers with offering the best option from all the applicable flights to meet various needs, as well as the faster and more frequent connections in Europe (including RFS), regardless of which AWBs of both carriers used for the booking.

ANA and Lufthansa Cargo have already signed the contract concerning this joint venture, and we aim to introduce the joint approach on shipments originating from Europe to Japan within 2015.

On passenger side, ANA and Lufthansa have already launched a joint venture on routes between Japan and Europe as both companies are part of the Star Alliance network. Now we will strive to contribute to our customer's convenience further by enhancing our competitiveness in the market. 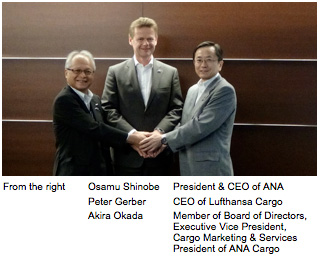